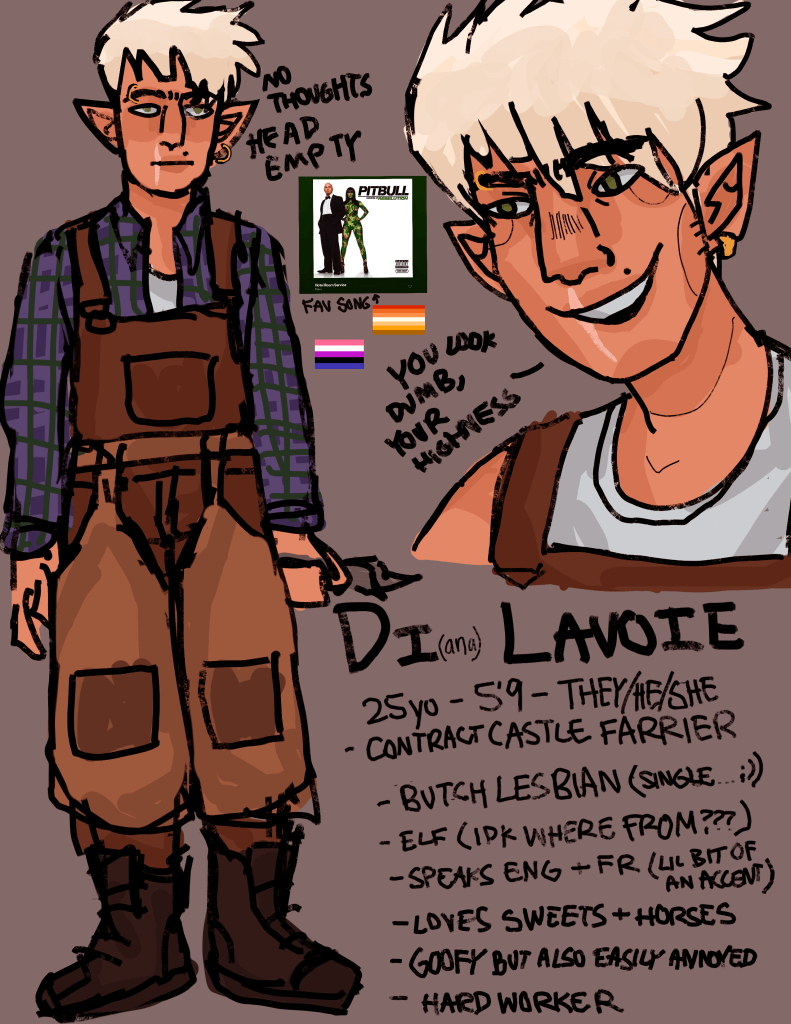 Di Lavoie <3 - i don't think they live at the castle, i think they're like a Contractor (unless they have TONS of horses that need their hooves tended to- they just come u know like once a week and work on the castle horses then fuck off to their own home / stable) - very respectful of marek at first but after they become pals di is mean, and then respectful "your outfit is so fucking lame. uh. your highness" - CAN be manipulated via sweet treats - plays whatever the equivalent of EDM party music is while she works. (in our universe- pitbull)

TRANSCRIPT:
panel 1: ms vega reaches for something off-screen. ms vega: "ah, well. why don't you take one for him. sweet kid, tell him to come by next time he's around town!" chaar waves her hands nervously. chaar: "ah- you don't have t-" she's interrupted.
panel 2: interrupted by ms vega handing her a bag. ms vega (mostly off-screen): "it's on the house!" chaar sweats but accepts the bag. chaar: "tha-thank you..."
panel 3: chaar walks through a wide street with people walking and moving around, there's also some people riding animals! fun.
panel 4: chaarose opens a stable door.
panel 5: a view of the stable. there's a couple horses in stalls and some hay. Di Lavoie casually greets chaar with a two finger wave as a horse licks their hair. di: "ey! if it ain't lieutenant chaarose! it's been a while, eh?" chaar rubs the back of her head. chaar: "ha- yes... well..."
panel 6: di (off-screen): "they got you back out on patrols again?" chaar (nervously, everything she does is nervously): "oh- no. just here to- uhm..."
panel 7: di pushes the horses head so its no longer licking her hair. di: "joyride, ah?" chaar looks somewhat relieved, but still sweaty. chaar: "yes, you could say that."